03.02.2020
The invention relates to the field of helium production from natural gas. The unit for He-3 extraction from commercial liquid helium includes the external helium liquefier, the rectification unit comprising the distillation column with condensers, the pipelines connecting the helium liquefier and the rectification unit, and one or more refrigerators that withdraw heat from condensers with an excessive backflow formed by adding liquid helium from the external liquefier. The invention provides for the installation and operating costs reduction, as well as for easier plant performance control.

At present, the helium-3 isotope is obtained from the decay of tritium, a component of thermonuclear weapons. The isotope has unique properties that determined its application in the sensors for detecting radioactive materials and radioactive sources, in image transfer systems based on nuclear magnetic resonance, respiratory organs diagnostics, in ultra-low temperatures technique in cryostats and refrigerators at the temperature level up to 0.3 K. However, scientists see particular prospects in Helium-3 as a fuel for future thermonuclear reactors.
Today, there is a shortage of this isotope in the world, and the non-nuclear (cryogenic) method of Helium-3 isotope production offers promising prospects on the market.


While developing the technology, PJSC "Cryogenmash" specialists were guided by the following principal approaches:

•    High energy efficiency;
•    Independence of the basic liquefiers from the He-3 recovery unit;
•    Development of the process and proven design of the equipment in the recovery unit development and production;
•    Simplicity of the process flow diagram, continuity of the He-3 production process and the mode control;
•    High He-3 recovery factor (at least 99.9 % );
•    The possibility of starting modes forcing;
•    No superfluidity conditions in the devices.

Some specific features of the process of He-3 recovery unit:
•    Separation is carried out by distillation method only;
•    The liquid helium flows from the basic liquefiers to the excess return flow refrigerators, and commercial one to the distillation column are completely isolated;
•    High efficiency and simplicity of the circuit and the equipment is provided in the refrigerator of the excess return flow due to the liquid helium adding;
•    Absolute independence of condensers by cold allows to force starting mode;
•    The basic approaches were proven by experience in developing cryogenic support systems for Tokamaks and particle accelerator.


Experience of PJSC "Cryogenmash" activities on the problem:
•    Development of a line of helium liquefiers of capacity from 200 to 2400 l/h for large accelerators and power projects;
•    R&D on air rectification with production of high-purity oxygen, nitrogen and argon;
•    Participation in the projects for development of hydrogen isotope separation units jointly with the Research Institute of Electrophysical Apparatus, "Mayak" Production Association, D. Mendeleyev University of Chemical Technology of Russia;

•    A number of heat exchange, hydraulics, helium isotope rectification and He -3 recovery from natural helium studies within the framework of the project of the orbit deep-cooled space IR telescope "Aelita". 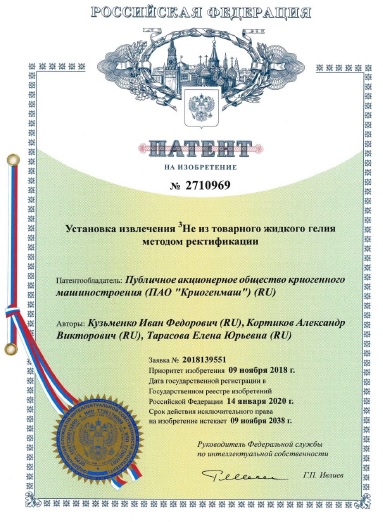